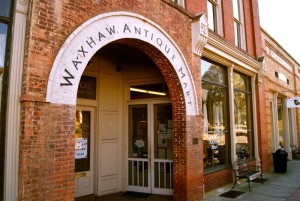 Located just 21 miles Southeast of Charlotte’s uptown area, Waxhaw has established itself as a growing suburb of Charlotte that has plenty of history to share with residents and visitors.

The Waxhaw settlement was originally discovered in 1670 by German scholar, John Lederer, but it was not until the arrival of the railroad system in 1888 that Waxhaw began to flourish. The railroad connected Waxhaw to the both Georgia and Virginia and helped with the transportation of one of North Carolina’s main products – cotton. Cotton mills sprang up all around the Piedmont area of North Carolina and Waxhaw was no exception. Cotton manufacturing continued to be a major industry through the 1940s. At the conclusion of WWII, this area had to adapt to the changes in the economy and at that point Waxhaw began to be known as a major antiques destination.

There are many historic homes and buildings that are part of the Historic District of downtown Waxhaw. Walking tours, city parks, retail and restaurants have been integrated into this area and the residents have worked hard to preserve this town’s history.

If you are interested in shopping for antiques in Waxhaw, here are some suggestions!