Wow! What a History! 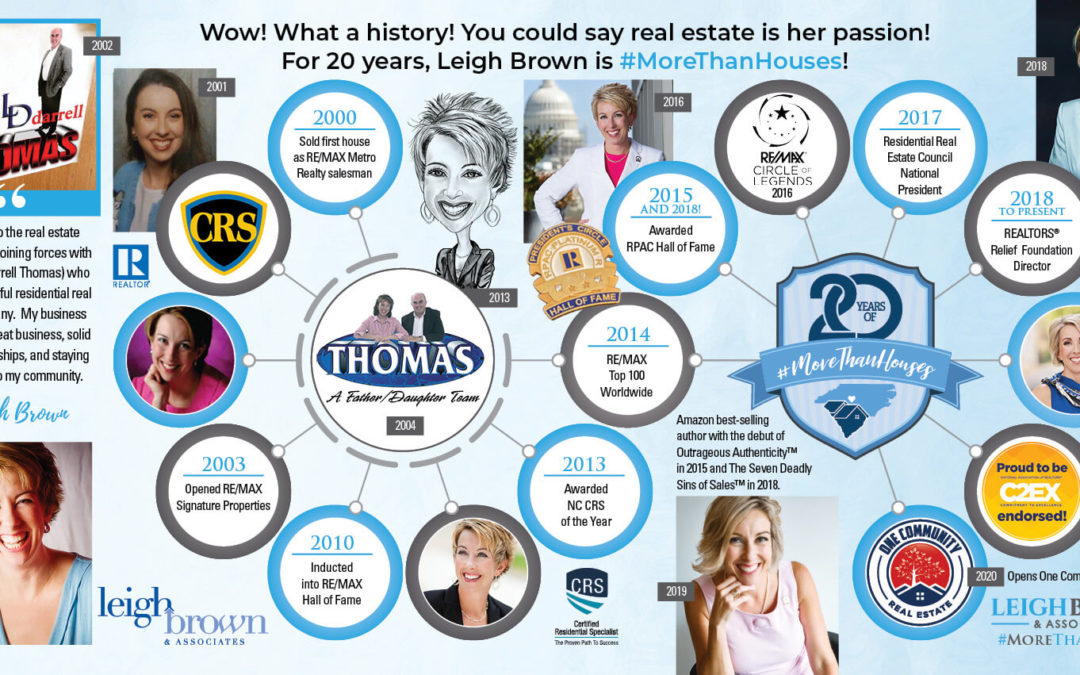 You could say real estate is her passion! For 20 years, Leigh Brown is #MoreThanHouses!

Over Leigh’s years as a REALTOR,® she has lived out her motto of #MoreThanHouses – even before we had hashtags! She strives to make her community a better place through personal interactions and positive relationships on a daily basis.

Leigh is a native of Cabarrus County. She has over 20 years of real estate experience in and around Concord, selling over 3,000 properties! Her understanding and knowledge of the greater Charlotte area, Leigh is second to none.

With the launch of One Community Real Estate,™ Leigh continues her mission to support and develop REALTORS® who are both leaders and advocates in their own communities while still striving to serve buyers and sellers as their REALTOR® advocate.

She’s halfway to REALTOR® Emeritus status! Please call or message her with your real estate questions and needs.  Come be a part of her *NEXT* 20 years!

2000 – Average home price $148,895 | 2020 – Average home price $265,397
2001 – Hometown racing legend Dale Earnhardt Sr. passes away in a crash on the last lap of the Daytona 500.  The Intimidator would have a grand statue displayed in Cannon Village a year later.
2002 – The Boys and Girls Club of Cabarrus County open their new facility.
2004 Concord wins the All-American City award.
2006 – Cabarrus County climbs over 150,000 residents.
2007 – First iPhone introduced.
2009 – The Grand Opening of the McEachern Greenway Downtown Connector.
2010 – The Carolina Thread Trails come to fruition in Cabarrus County.
2011 – Hurricane Irene makes landfall.
2011 – The Cabarrus Correctional Facility closes – it will later be replaced by the Southern Grace Distillery.
2016 – The Harrisburg Veterans Bridge opens.
2016 – Cabarrus County goes over 200,000 residents.
2016 – Concord is named one of the 10 fastest growing cities in the United States.
2017 – The only double-decker carousel in North Carolina opens in Kannapolis at Village Park.
2019 – Amazon opens a state-of-the-art distribution center in Kannapolis, creating over 1,000 new jobs in the process.
2020 – The Piedmont Phillies, Piedmont Boll Weevils, Kannapolis Intimidators, Kannapolis Cannon Ballers begin to play their home games at the Kannapolis Sports and Entertainment Venue.

“20 years in real estate is an accomplishment that I am very proud of.  I have had the privilege of completing over 3,000 transactions. Leigh Brown & Associates has risen the ranks of real estate in the greater Charlotte area.  My team and I call this area home – we live here, we work here, and we LOVE here.  And we are looking to do even more! With One Community Real Estate, we will be able to better serve the community.  We want to do MORE than just sell a property here and there – we want to grow and improve the community.  We want to work with Realtors® who are advocates for their community members.  I am absolutely elated to be the change!”

Come by and see us, anytime!
Leigh Brown & Associates, One Community Real Estate™