Use Your Voice With the NC Department of Transportation and GET INVOLVED in upcoming NCDOT Moves 2050 projects! 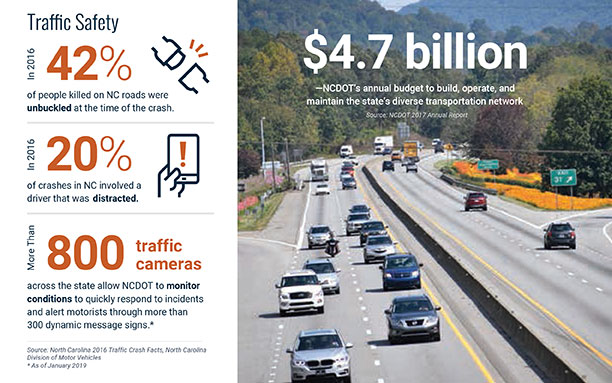 1)  NCDOT maintains more than 80k miles of highway and has the 2nd largest state-maintained highway system in the country.

2)  And the state spent $4.7 billion in 2017 building, operating and maintaining our highways.

NC IS GROWING FASTER THAN A HOT KNIFE THROUGH BUTTER! If you think I-485 is crowded now, it will probably just get worse! Remember, NCDOT SPENDS YOUR TAX DOLLARS…….so Cabarrus and Mecklenburg County friends, you better be paying attention!  Your feedback is important because there is alot of different priorities and modes of transportation NCDOT must consider.  So each of us can have a say in what the NCDOT plans to do. NCDOT has opened up public engagement, discussion and feedback in a couple of different forms until June 2020.  Whatever inprovements you want to see, it’s time to let NCDOT know.  Leave your feedback on the interactive feedback map by dropping a little square on the map and telling them your ideas: https://vizmaps.wspis.com/2050plan/crowdsource/map#

You can also host a local Table Topic Group. This is a way to get 6-10 people at your job or in your neighborhood to get together and talk transportation priorities and concerns.  After ya’ll discuss, you send NCDOT a completed comment form with feedback. If you want to lead a Table Topic Group, you must apply by 3/31/19 at https://publicinput.com/3780